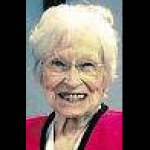 Around 6:30 a.M. On tuesday, may 27, 2014, as the mist was rising from the mountains, the soul of bea parsons kirkpatrick swirled skyward.
At her birth she was named beulah pearl parsons by her parents, lillie mae waugh and holley howard parsons. Shortly after the death of her husband, robert howard kirkpatrick, she changed her name to bea. Bea was also preceded in death by two brothers and a sister.
Her legacy here on earth is her children: beth (steve) fischer of minneapolis, minn., patty (kenny) waldeck of charleston and robb (lori) kirkpatrick of jupiter, fla. Bea was grammy to eight grandchildren and 16 great-grandchildren.
During her 92 years here on this earth, she was a good and faithful servant to god, her children and to nature.Over the span of her lifetime she was a legal secretary, a school secretary, assistant director of the eastern panhandle training center for the mentally and physically handicapped and the director of the berkeley county senior citizens center.Bea was active in various clubs and organizations. Most recently she was a volunteer for the nature conservancy. Her love of nature helped her to create many award winning flower arrangements and to beautify the landscape of any place she called home.
Bea loved to plant a seed and to watch it grow. She also kept her hands busy by cooking, sewing and quilting.When her hands were still and music was playing, her feet were always in step with the beat. Didn’t matter if it was a square dance or a two-step, she was at ease swaying to the music. She would be the last to leave the dance floor.Bea also kept her mind as active as her hands and feet. She was an avid reader, who loved a good murder mystery, and a competitive force to be reckoned with when playing cards. She loved bridge and had earned “master points.” bea was a proud member of the grandparents club that meets at uc to play bridge. She was no dummy when it came to finessing a trick.
The life of bea kirkpatrick will be celebrated with:visitation will be held from 6 to 8 p.M. Friday, june 13, at barlow bonsall funeral home.
Graveside service will be held at 1 p.M. Saturday, june 14, at mountain view cemetery. The funeral precession will leave the funeral home at 12:45 p.M. The service will be officiated by rev. Brown of ruffner memorial presbyterian church, where bea was a member.
In lieu of flowers, donations can be made to the alzheimer’s association wv chapter, 1601 2nd ave., charleston, wv 25387.Just for today … Remember to listen to the whisper of the flowers, the chirping of the birds and the laughter of your family which adds beauty to the world. You are loved!