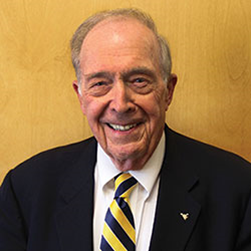 A graduate of west virginia university dave remained a life-long fan and ardent supporter of the mountaineers. He loved the university and advised and supported many areas always focusing on academic excellence first. He was instrumental in restarting the men’s golf program competing in the big 12, a sport dave loved dearly and played at a high level his entire life. Just recently the university foundation highlighted dave’s lifetime of giving in a special publication. In this article, dave still remembered and gave high praise to a professor that took him under his wings that made his own college path a success.

Dave had an astute mind for business and had a very successful career in the oil and gas industry. As chairman and chief executive of kanawha valley oil, he led one of the largest distributers of oil products and retail outlets in the eastern united states. After retiring from kanawha valley oil, he went on to lead oil and gas partnerships that developed wells across the ohio valley.

Throughout his career dave utilized his keen business savvy in the investment arena and became a most successful bond investor, supporting many public works projects throughout our state. He was often called on for counsel from investment managers to public officials to friends, wanting his wisdom imparted for their own investing. His financial acumen in structuring investments remained a passion throughout his life

he utilized his experience and expertise for the benefit of our city as well. Among numerous examples, dave served for over fifteen years as a board member through the transformation of the new charleston coliseum and convention center’s $100m rebirth. He was an avid supporter of the university of charleston true to form promoting academic excellence and was a frequent visitor to campus. He had a keen interest in supporting the kanawha valley fellowship home helping men overcome substance addiction.

Dave never wavered from knowing and living the importance of family and giving back to make this world better. His grandchildren always called him “big dave”, and he loved it. They all looked up to him and cherished the times they spent together.

This love and respect for dave spread throughout our state with so many lasting friendships with west virginians from all walks of life. Dave’s friendship was a gift that was respected and cherished.

In recent years dave’s passion for helping others focused intently on hospice care, the wallace grief support center and his quest to build the t center to help with the opioid epidemic ravaging our state. These three initiatives consumed him with much determination. He often talked about the incredible hearts of the people involved in these areas and how blessed he felt to play a small part in helping them. That’s how big dave rolled. In the midst of pouring his heart and soul into helping others he always felt he was the one getting the most out of it.

Dave’s prowess for golf lasted a lifetime and the epicenter for this was berry hills country club. He commented recently he was the oldest member of the club. It is fitting that he and several of his lifelong buddies had plaques made for their ashes to be interred on the grounds of berry hills. It will be with this memory where the family will hold a celebration later this spring.

In lieu of flowers contributions may be made to hospice care 1606 kanawha blvd w., charleston wv 25387 with heartfelt thanks.