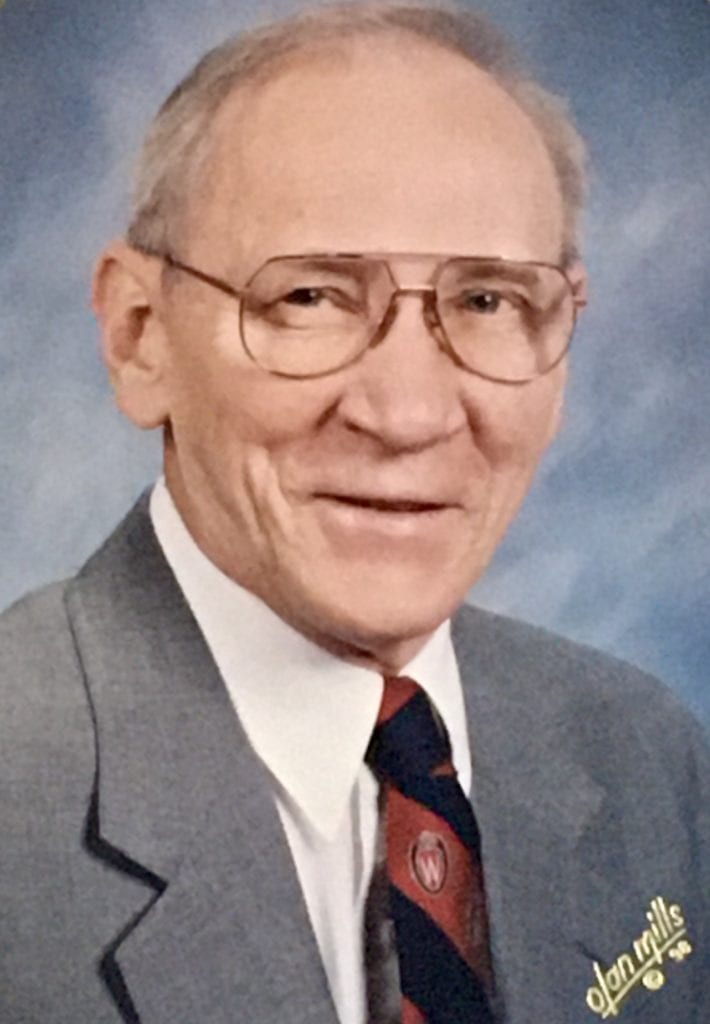 Joseph Victor Koleske passed away Saturday, December28, 2019. He was born on January 23, 1930, in Stratford,Wisconsin, to the late Joseph J. Koleske and Mary Helen
Koleske, née Jilek. Vic grew up in a family owned grocery in Racine, Wisconsin and the family later moved to a fain Colby, Wisconsin. He spent his childhood hunting and
trapping and often spoke of “checking the trap line” onhis two mile walk to school in subfreezing temperatures.Vic displayed an early interest in chemistry, often getting
into trouble for conducting unauthorized experiments. Hegraduated from Colby High School where he played
clarinet in the band with his future wife, Mary Anne Casey. The two were married on November
3, 1951. He enlisted in The United States Air Force during the Korean War and was stationed in
France and at the Air Force Missile Test Center at Patrick Air Force Base in Florida. Vic
received a Bachelor of Science in Chemical Engineering from the University of Wisconsin. At
the University of Wisconsin, he was a member of Tau Beta Pi Honorary Engineering Society
and Phi Lambda Upsilon National Honorary Chemical Society. He was awarded a PhD in
Polymer Physics from the Institute of Paper Chemistry at Lawrence University in Appleton,
Wisconsin. In 1963, Vic and his wife settled in Charleston, West Virginia, where they raised two
children, Robert (Bob) Koleske and Krista Koleske Killmeier. Dr. Koleske joined Union Carbide
at its South Charleston Technical Center in 1963. He was recognized as an expert on the
mechanical properties of polymers. He has over 100 publications and patents. Dr. Koleske
received the award for Scientific Achievement of the Kanawha Valley Section of the American
Chemical Society in 1978. In 1983, he was awarded the position of Corporate Fellow. He
authored “Poly(vinyl chloride)” in 1969, “Poly(ethylene oxide)” in 1976, “Alkylene Oxides and
Their Polymers” in 1990, “Cationic Radiation Curing” in 1991, “Free Radical Radiation Curing”
in 1997 and “Radiation Curing of Coatings” in 2002. He edited the ASM International’s “Paint
and Coating Testing Manual” in 1995 and 2012 and Paint & Coatings Industry Magazine in
2000+. Dr. Koleske served on the Board of Trustees of the Paint Research Institute and on the
Editorial Review Board of the Journal of Coatings Technology. After retiring from Union
Carbide, he was a Senior Consultant at Consolidated Research, Inc., in Kingsford, Michigan. In
2019, in recognition of his contributions to the scientific community, Dr. Koleske was awarded
the Albert Nelson Marquis Lifetime Achievement Award. He was a devout Catholic and a
member of Sacred Heart Co-Cathedral for over 50 years. He served Sacred Heart Church as
an usher and member of the Serra Club. For many years, Vic volunteered for PRO-Kids, Inc.,
an after school tutoring and enrichment program serving local underprivileged youth. Reading
and writing were some of his favorite past times. He also enjoyed spending time creating
pottery and collecting stamps and coins. He and his wife enjoyed cruises, summers in Hilton
Head, trips to Disney World with their grandchildren and a safari in Eastern Africa. Vic is
preceded in death by his wife of 68 years, Mary Anne Koleske, née Casey, sister-in-law,
Eleanor Frances Doneski, née Murphy, of Waltham, Massachusetts, and twin brothers, Thomas
Koleske and Robert Carl Koleske of Racine, Wisconsin. He is survived by his children, Robert
Casey and Krista Killmeier (Greg), grandchildren, Nicholas and Abigail Killmeier, sister, Cynthia
Koleske-Tamos of Westmont, Illinois, and brother, David Koleske (Barbara) of Minooka, Illinois.
The family appreciates the supportive and caring assistance from Visiting Angels. A private
service will be held for the family at The Basilica of the Co-Cathedral of the Sacred Heart. Vic
will be laid to rest at Mount Olivet Mausoleum in the Spring Hill Cemetery in Charleston, West
Virginia. Family suggests memorial contributions be made to Kanawha Hospice Care 1606
Kanawha Blvd. W. Charleston, West Virginia 25387. Barlow Bonsall Funeral Home has been
entrusted with the arrangements.