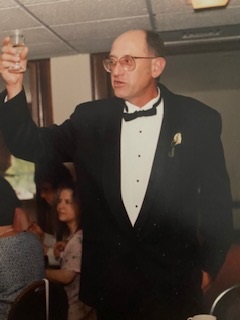 On Sunday morning, January 3rd, Samuel (Sam) Kurko Sr. died of complications from Covid 19 with his daughter Rebecca Ann Stratton and his eldest son Samuel Kurko Jr at his side at CAMC Memorial hospital in Charleston, WV. Born and raised in Martins Ferry, OH, Sam Sr. graduated from Martin’s Ferry high school in 1961. In 1969, He married his one true love Barbara Lee Fuller at Finley Methodist Church, in Steubenville Ohio. Sam was a U.S Navy Vietnam veteran and a retired United Mine Worker with over 20+ years of service. Sam was also a faithful, long time member of Bethany Baptist Church. He was very involved in the church as he served as a deacon and usher and he sang with the church choir, An avid hunter and fisherman Sam enjoyed the solitude of the great outdoors but unbeknownst to others he was also a very good dancer. He would show off his dancing skills at weddings and family events. He was a good Samaritan to all, friends and strangers alike as he did not hesitate to assist others whenever they needed help. He loved to spend time with his grandchildren and with his loyal companion, his fur baby Missy his chihuahua/lab mix dog. He touched the lives of all of those around him and he will dearly be missed by everyone that was lucky enough to know him.
He leaves behind his two sons, Samuel Kurko Jr. and his wife Pamela of North Providence, RI; Robert Joseph Kurko of Elkview WV; his only daughter, Rebecca Ann Stratton of Scot Depot, WV. He also leaves behind his three beloved grandchildren Emalie Elizabeth, Joseph Michael and Sage Ann. He is predeceased by eldest sister Joanne Bess; his two brothers Michael Kurko and his Nicholas Kurko. He leaves behind three sisters, Patricia Kelley of Rayland, OH; Shirley Kurko of Martins Ferry, OH and Constance Kurko also of Martins Ferry, OH.
In lieu of a funeral the family will be having a Celebration of Life remembrance service come this spring, date to be determined.
Condolences may be sent to the family at www.barlowbonsall.com .
Arrangements are being handled by Barlow Bonsall Funeral Home, Charleston.